I sometimes forget that not everyone who reads this comic also follows me on Facebook or Twitter. So for those of you who have been left in the dark on this, here’s where we’re at right now.

Last Monday my computer up and died on me. It was functioning perfectly the night before and the next morning I go to turn it on and the LCD screen is a garbled mess. A new screen had to be ordered in for me and on Friday evening it was replaced. The screen looks perfect and I was ready and willing to get started on some new comics for Monday when it soon became apparent that the LCD screen was not the full extent of the problem.

Long story short, my computer is still entirely unusable and at this rate it looks like I may not even be able to get it seen by the appropriate parties until Nov 20. I’ve no idea how long it may take to resolve the problem after that. Until that day, however, I have no way of creating and uploading new comics. And if you think you’re bummed about that, I can tell you that I’m about ten times more bummed than you are.

From bad to worse, I will be in Australia for a few weeks from Dec 5. If I can’t get it fixed soon I may not have time to sort out some comics in advance of my trip. These are dark times. But rest assured, I will be back up and running eventually. Watch my social media for any updates.

Finally, here are the long boring details of my current problem for anyone who may be able to help. If so, shoot me an e-mail:

Fan is extremely loud upon booting up and the computer slows to a crawl making it almost impossible to do anything. Activity Monitor shows that CPU usage is around 80-90% even when zero apps are open. Process called ‘kernel_task’ is reading at 600-800% CPU usage. Multiple SMC and PRAM resets have yielded no results. Running 27″ iMac w/ SSD and upgraded to Yosemite about two-three weeks ago. 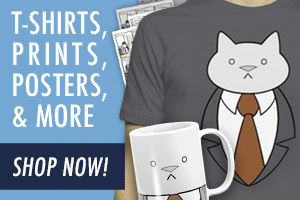